The year is slowly coming to a close, and while some are planning on how they will start off the New Year on the right foot, others are reflecting on the past 365 days. What was the best decision you made this year? Should you have done something differently? If you could go back and change one thing, what would it be? Some will reflect on the mistakes they’ve made in the past year or just set goals for themselves for the New Year, more commonly known as ”New Year’s Resolutions”. Here are some of the top resolutions throughout the years:

While there are some who use the New Year as a clean slate, others don’t care much for making resolutions. Every year I tell myself I am going to get fit and healthy, but then a few weeks in I remember I have no self control and that piece of chocolate cake looks really delicious. Gym’s suddenly become more crowded after the New Year for a few weeks or so, and then people eventually give up and say “I’ll try again next year.” Also, don’t be surprised if you see family and friends striving to be healthy by cutting out junk food or trying to quit smoking cigarettes. I always give the highest respect to people who take charge and change their habits because to them it could be life or death. Looking back at the past year, people wonder how they can make the next year one of the best. Some people set goals such as moving to another state of country just to experience the world while they still can. Others set smaller goals like being nicer to certain people, or finally getting that promotion they’ve been wanting. Something I have noticed the past year is that a lot of people who are trying to get healthy is that they will train for months and months and then compete in a marathon or a 5k. To them, completing that race is the ultimate goal. If they complete it, they know that they have achieved a resolution. With that being said, why not set a small goal for yourself?! Even something as little as learning how to save your money, or to learn a new trait. Join a sports team, apply for a job you thought you would never get just because, you never know what could happen. There is no better feeling that achieving a goal you never thought you could. I hope everyone has a fantastic New Years and I cant wait to continue blogging with you in 2014!! 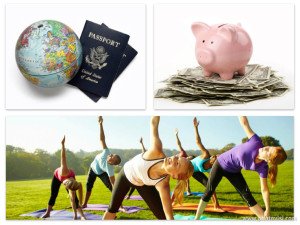